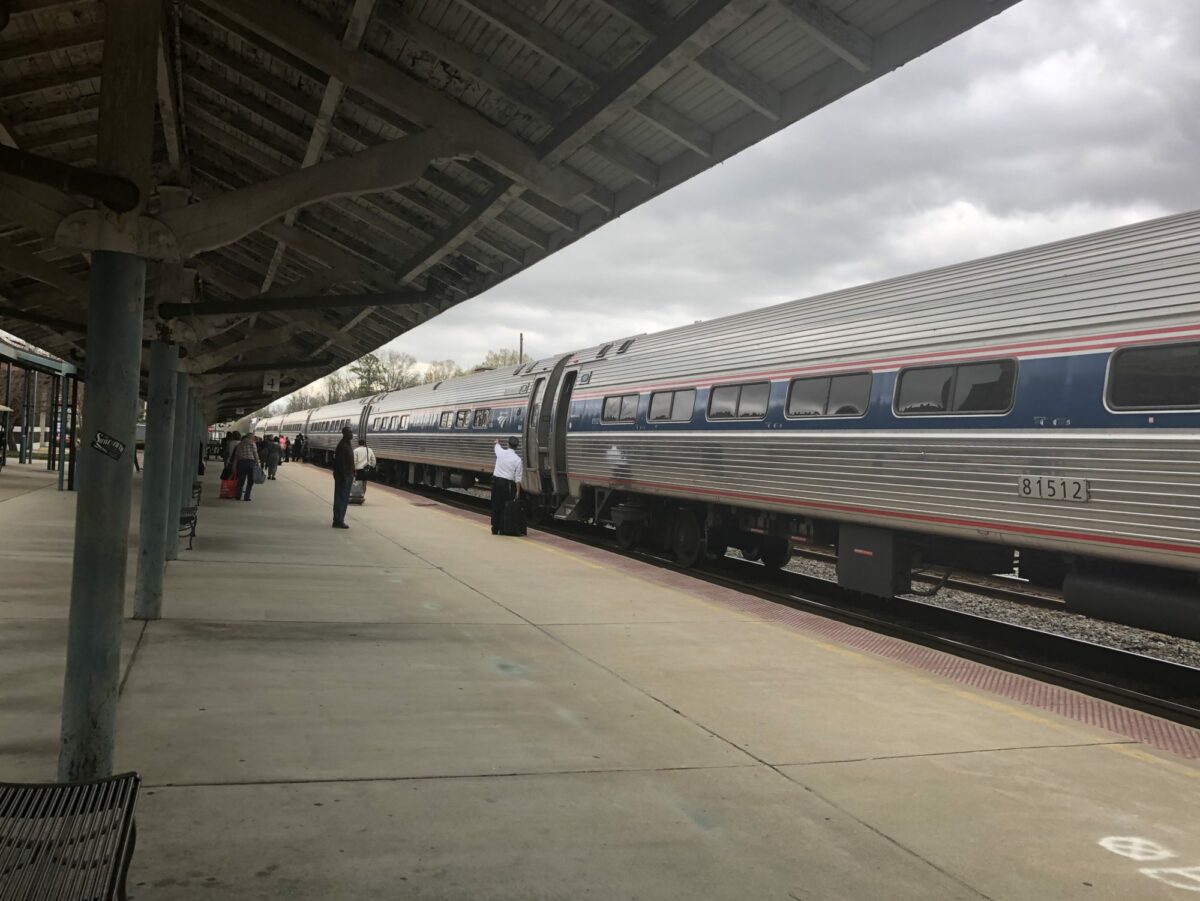 Amtrak at the Wilson (NC) Station

For now, I will skip the post of my visit with Abby in Charleston, SC, but jump to the next phase of the trip, traveling to Disney World by Amtrak. Mainly Abby and I went to the dog park, she got brushed, fed, and repeat, but I may come back to it, though, if you want.

Charleston, S.C. to Disney World by Amtrak via Kissimmee, FL

On Sunday, March 31, my brother-in-law drove me to the new North Charleston Amtrak Station to head north to catch a train to head back south again.

When I arrived last week, it was a quick walkthrough because my little niece was unhappy that she and her mom had to pick me up at 5:30 am. So I could not see much of the station, but I enjoyed the new station and took a few photos during this visit. They are still working on finishing things up, such as parking, landscaping, and interior decorating.

This time gave me a little more time to walk around and enjoy. While waiting, I heard my name announced over the P.A. system to come to the ticket office, the first time this ever happened. As I walked up, I thought something happened or who died?

Long story short, the agent noticed my ticket and said that she could save me time and money on my trip, which was why she called me up. It was very kind of her. This station has the best agents I have ever dealt with for years of Amtrak travel. To get to Kissimmee, I had three train routes to choose from, and I decided on the most extended way because I could, and it fit everyone’s schedule the best.

If the agent only knew I rode Amtrak for fun as well as transportation.

The Palmetto was the first train of this adventure; from Charleston, S.C. to Wilson N.C., I went north to go south. Last year, you might remember I rode the Palmetto from Philadelphia, PA, to Charleston, SC., and like then, I used business class.

The ride was pleasant but for a gaggle of gals who also boarded in Charleston. There were a little louder than I would appreciate, but it worked out.

I don’t mind others having a good time, but people should remember they didn’t invite everyone else in the car to their party, so it can be a little annoying when they do get a little too loud — this is why I pack over the ear headphones to block the noise out, and we are all happy.

Moral of the story is, be respectful of your fellow passengers

The Wilson, (N.C.) Station, an old 1924 Atlantic Coastline Railroad Station, has a nostalgic charm. To celebrate the 100 plus years of railroad history in  Wilson, the NCDOT commissioned a mural for the station.

The station has two waiting rooms, a larger waiting room, where the mural is the focal point, and a smaller place off on the side that works well if you need work or want less traffic.

There are vending machines in the hallway between the two waiting areas if you need a snack or beverage.

This staffed station offers a check bag service (if applicable to your trip). Because this is a small station, the agents may not be available for ticket sales or other in-station assistance right before a train comes or while the train is in the station because they are working on getting passengers on and off the train. The station also has Amtrak Connecting Bus services.

On your next visit to Wilson, say hello to Miss Rail Rose, a mosaic lady who greets and bidding farewell to all passengers.  I am not sure if she is waiting for a train, but when it does arrive, she is ready.

While in Wilson, I forgot that most southern cities close on Sundays, so nothing was open around the station.

The short trip to Raleigh happened aboard the Carolinian in business class. I sat next to a lady on her way to stay with her daughter, who had an upcoming surgery. We started chatting while waiting for the train and then quickly became seatmates.

One enjoyable feature of business class on the Carolinian is the car attendant. The attendant helps passengers on and off the train, assists with ticket collection, and offers hot and cold complimentary beverages. I experienced a similar service on the Pacific Surfliner in C.A.

The train came in on time at the Raleigh Union Station. After de-training, I walked from the platform to the station through a tunnel.

At the Raleigh station

During the layover, I met with a Facebook friend and TWK follower, Gayle McCurry. Gayle was a wealth of knowledge of the Amtrak in N.C. and my guide to the city.

Gayle is an active member and the contact person for North Carolina’s Train Host Association. The Hosts serve as “Goodwill Ambassadors” for the North Carolina Department of Transportation sponsored Amtrak trains, Piedmont, and Carolinian. According to the NCDOT brochure, “volunteers assist passengers with travel questions and information, assist train crew in duties as required by them, and promote rail safety.”

After Gayle a quick look at the station, we walked to the Food Hall to get something to eat. The Morgan Street Food Hall offers a variety of food and beverage vendors. We found the Cow Bar, a burger and fries joint, after scouting around the Food Hall. I walked over to the bar near the center of the building for a brew to wash it down.

The food was excellent and filling! The burger was enough, but the fries were too tempting, so I ordered those in addition to the burger.

We walked back after the delicious meal, and Gayle showed me the station’s grounds and interior.  What an impressive station with room for growth. After this short visit to Raleigh, N.C., this city is now on my list of cities I want to return to and explore.

I booked a roomette aboard the Silver Star down to the Kissimmee Amtrak Stations, the other option being the Silver Meteor. From Charleston, the Meteor is a more direct route. Both trains run from New York Penn to Miami, FL; the differences between the two trains are:

The Auto Train will take you to Stanford, FL, from Lorton, VA, and then you have a car to drive the rest of the way.

My experience with the Silver Star was pleasant,  I did miss the dining car, but I only had lost one meal on this train because of when I got on and off the train.

The only regret I had for this part of the trip was I didn’t get in line at the hot dog stand line early enough at the Orlando Station. We were at the station longer than I thought,  so when I did get inline, they started calling All Aboard; I missed out on that.

Getting from the Kissimmee Amtrak Station to Walt Disney World is relatively easy, especially with basic public transportation knowledge.  Look for a bus stop sign with the number you are looking for and your destination. Apps like Google Maps will tell you what bus or train you need to ride. Remember that buses go in two directions, so pay attention to the bus’s destination signs to ensure it’s going to the correct location.

If you want to take the bus to Disney

The closest #56 Lynx Bus Stop is on West Neptune Rd from the Kissimmee Station, just a short walk from the Amtrak station (about .2 of a mile). #56 travels to Disney every 20 minutes and terminates at Disney’s Transportation and Ticket Center, so you will never miss your destination.

Once onboard, insert two dollars in the machine, and you are off! Remember to have the exact amount because drivers do not give change. Then sit back for the roughly hour-long ride to the park.

From Disney’s Transportation and Ticket Center, you can find a ride to wherever you need to go on the Disney complex via bus or monorail. There is a security check before you get on the monorail at the Ticket and Transportation Center. Disney Security checks all bags brought into the parks, including luggage. It is easier than getting through them than the TSA.

There is public transportation from Orlando, but then there are transfers while Kissimmee was one bus.

Rideshares like Uber and Lyft are also available that works better for you.

I hope you have been enjoying this part of the trip!

Looking for more information on traveling Amtrak, check out this page! Have other questions, feel free to contact me!