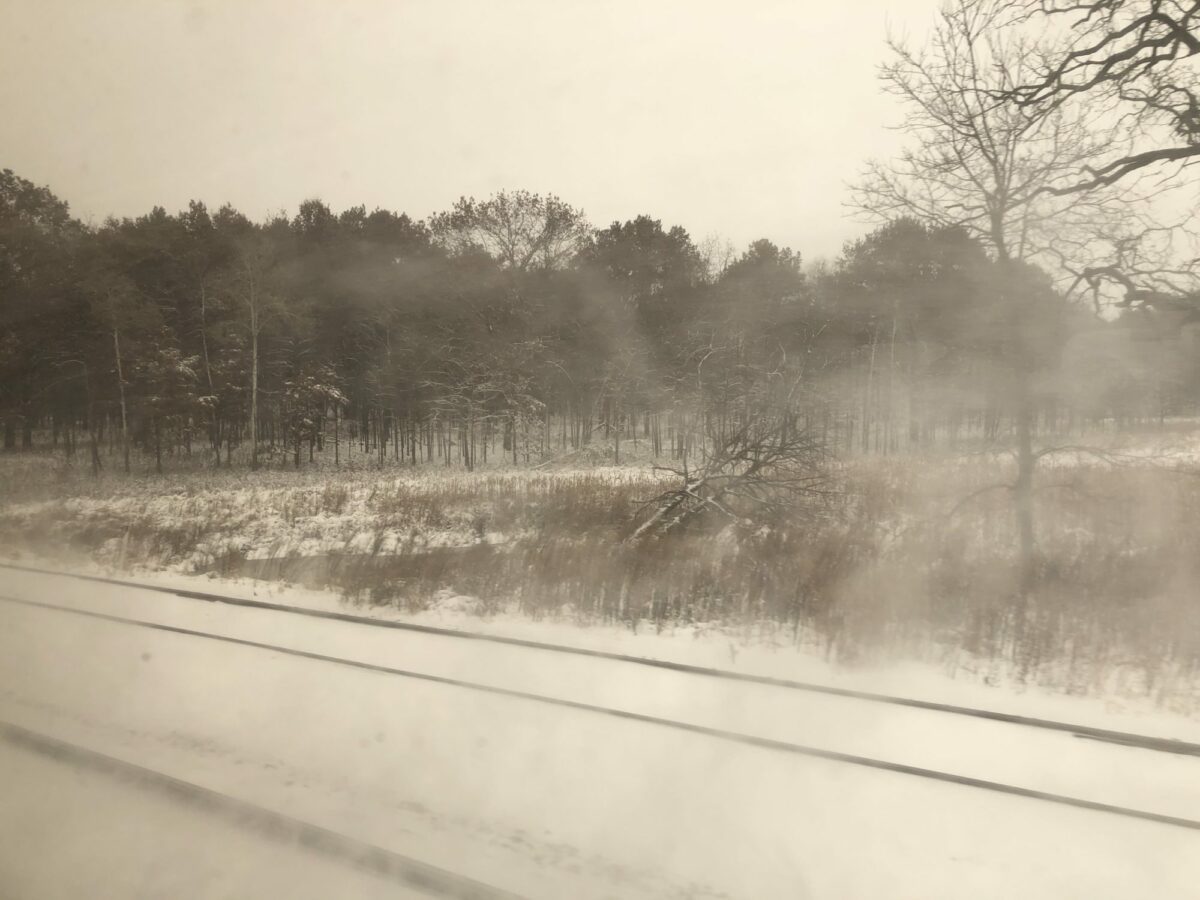 As you might remember, I brought my mom to Nebraska last month. She came to stay with my sister and niece while my brother-in-law was away at job training. Well, this trip is the back half of that trip. I came to hang out with them for a week before bringing her home. For a recap on the situation, click here.

This trip is about traveling on Amtrak’s Hiawatha and California Zephyr.

At the start of the trip

In the past, when I left for Nebraska, it was on Sundays after my postlude was over. This Sunday was different; not only did I play the organ for my church, but another one as well. The second service started when I needed to leave for the train station. That makes going leaving a little challenging. Since I was leaving on Monday instead, I attended a theatre organ concert with my dad. A talented young organist, Nick Renkosik, performed a fantastic show at the Carmex Wearhouse during a Dairyland Theatre Organ Society event.

The night before I was to leave, it began to snow, and it continued to snow through the next day. Because of the storm, I went earlier on Monday than planned because I did not know the conditions of the roads to the Sturtevant Depot. Instead of taking my car, I drove my mom’s Ford Escape, and I am glad I did because it has all-wheel drive. Although the snow diminished the furth west you went, I was happy I decided not to drive out to my sister’s for this trip.

Before returning to my bag, a lady started questioning me about Hiawatha travel and beyond. I am not sure if I have a look of confidence or my Amtrak winter hat, but I often get asked about what’s going on at that depot.

The Sturtevant Depot is unstaffed, so she didn’t have anyone to help her. Her inquiries went beyond Amtrak to include a transfer to a BNSF Metra train. Her journey went from Sturtevant, WI, to Arura, IL. To make things easier for her in the future, set up the Venta App to purchase Metra tickets on her phone ahead of time.

The ironic part of the story is that my train caught up with hers at Naperville, and we passed it after Aurora.

The Hiawatha: Boarding and heading to Chicago

Helping her made the time fly by, and the next thing we heard was Ben, one of my favorite Amtrak conductors, announcing it was time to head up and over the bridge. We left the warm station to brave the snowy element for our train. Once we got on the east platform, we walked to the south end of the platform to wait. Soon the Hiawatha pulled into the depot, and we climbed aboard, but before we got on, my temporary travel buddy asked me if I was sure it was the right train.

I never understood why people who ask for help doubt me when the train arrives. Aren’t we going to the same place; why would I lie to you? Besides, there was only one train at the station; the conductor announced the train destination as Chicago, so yes, I am sure. I know people are nervous, which might be why they doubt, but it makes me chuckle.

After boarding, I led us to the lead car, a recently refurbished Horizon car, to enjoy the snowy vistas as we rolled along. I took the cover photo for this article on this train. As we approached downtown Chicago, we saw the infamous switch heaters that looked like the tracks were on fire. As we pulled into the station, we prepared to leave the train and head into the station.

After my temporary travel companion and I arrived in Chicago, we checked the departure boards to see where and when her next train was leaving. We followed that activity with a walk past her train’s location before heading upstairs to Jersey Mike’s, a new addition to the food court. As we waited in line, I found out she was a vegetarian who ate fish; I found that interesting. It appears she follows Ron Swanson’s idea of fish:

Fish, for sport only, not for meat. Fish meat is practically a vegetable.

After gathering our food, we went downstairs to see if she could load her train. After asking if this was the correct train, she climbed aboard, and we parted ways. My next stop was the Great Hall; this is where I waited for my train.

On my way to find a seat and eat, I purchased a couple of PBRs to wash down my meal.

After consuming my sandwich, I made a quick pit stop and stretched my legs. After the Texas Eagle passengers left, I knew the California Zephyr would be next. Not long after those passengers were gone, they called for Zephyr passengers to line up, and soon we walked to our waiting train.

A board the Califonia Zephyr

Those of us riding to Omaha sat in the train’s last car. I was assigned a window seat on the left side; I sat on the right on the past trips. Not long after settling in, a seatmate came along.

The Burlington, IA, bound seatmate was not outgoing, so I was nice but did not engage much. I am glad I brought my over-the-ear headphones; they helped block out the seatmate’s Facetime and speakerphone conversations. I always felt that headphones with a mic work better when using a speakerphone and Facetiming while sitting beside someone inconsiderate. They could have gone to the observation car as well. After the seatmate departed from the train, I had both seats.

Because of the snow and cold, we experienced a mechanical problem that gave an issue twice. There was an issue with a frozen air hose. We stopped before Mendota, IL, while at the Ottumwa (IA) station for the crew to address the problem. After that, we didn’t have issues with it again, at least not for the remaining time I was on the train,

I spent most of my time at my seat watching the scenery and entertainment on my iPad.

When the Zephyr arrives in Omaha, there are two stops to let the sleeper passengers off, load and unload the baggage car, and refuel locomotives. Then they pull the train forward for the second stop, letting the coach passengers on and off. The reason for this is simple; they are in the process of replacing part of the platform. The whole train does not fit on the platform; thus, the two stops.

After the Zephry pulled into Omaha

Due to a disabled BNSF freight train ahead of the Zephyr, they could not move the train to make the second stop. Eventually, the coach car attendant escorted us through the train to the first sleeper car to exit. Two people had huge issues with waiting; apparently, they were unaware that others wanted off the train and had people waiting for them.

My sister graciously waited for me to get off the train.

After we returned to my sister’s house, the big fluffy puppy was excited to see me. Abby, the Newfie, greeted me at the door for some ear and butt scratches. I think that night, she was the only one excited to see me. Little Mackenzie was also happy to see me the following day; she crawled on the blow-up mattress and snuggled.

If you are interested in more information on traveling on Amtrak, check out this page.

Kev has been traveling with Amtrak since 2012, celebrating his tenth year this year. Over those years, he has been on over 700 trains covering over 200,000 miles of rail. Kev enjoys helping others achieve their travel dreams by assisting them to get started. Kev enjoys making music as an organist.

Amtrak Crescent: What You Need To Know

November Trip to Chill With Abby